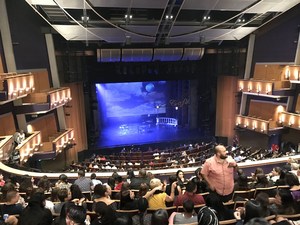 Mr. Chacón take his class on another top notch field trip to experience the arts.
Once again, the drama students of Mr. Daniel Chacón's drama classes were priveledged to experience theatre in the heart of Los Angeles' cultural center. Along with Mr. McKendrick, Chacón's class of 28 students loaded onto the bus to make the drive out to downtown on the morning of Tuesday, September 26th. On a smoggy day in L.A., the kids made the best of the cool autumn morning by having bruch outside the theatre before the show with more nearly 2,000 other high school students from the Greater Los Angeles Area. The play, Red Shoes, expressed the tug of war between romance and dance through motion and music. No dialogue was spoken during the entire two hour performance so audience members had to pay close attention to the scenes as they developed onstage. This was a wonderful opportunity for students to use their critical thinking skills to interpret the meaning of the story's plot through ballet and music.